Leprechaun Vomit... or why I hate St. Patty's.

I used to lament that the most irritating aspect of St. Patrick's day was the well meaning, but historically ignorant, neo-pagans who decided that the day should be one not of celebration, but of mourning. Why, they would ask, would any polytheist willingly celebrate the coming of Christianity and the eradication of the "old" religion? After all, isn't one of the most famous episodes of St. Patrick's hagiography the fact that he drove all the snakes out of Ireland; and of course, "we" all know those snakes were really the Druids. Yeah, so this was (and remains) a very irritating meme which seems to pop up every year around this time in March. Long story short: no, the episode was lifted from another Saints legend and was (among other things) used to explain why there are no snakes; but it was about actual snakes, not symbolic ones who were secretly referencing Druids. Two, the reason I celebrate the day, despite not being of Catholic stock, is because I recognize the historic and cultural significance the day represents; doubly so here in the diaspora. If you want to know a little more, and understand the origins and significance of the bevy of Parades which occur, just do a little research and you'll come to see why the day is far more about the Irish cultural identity, and less so about the Saint it was named after. The proviso to this being that this really only holds in the diaspora, and it is more of a religious observance (which btw is muted, seeing as it is Lent) in Ireland itself.
Alright, so clearly I actually celebrate the day, why then do I make a post insisting that I hate it. Well if you haven't figured it out yet, you will shortly. I mention above that the real significance of the day is about recognizing and celebrating Irish culture. This is not, however, what tends to actually happen. No, instead we basically throw a Mardi Gras party, except instead of everything being purple, yellow and gold, everything is shiny, vomit inducing green. St.. Patrick's day is a day when everyone, all over the world, can come together and get absolutely shit faced. This is what St. Patrick's day has become, this is the single thing that is worth celebrating about Irish culture; they drink. A LOT. Not that American's, Canadian's, the English or any other culture drink themselves stupid, no of course not. Not that people of all cultures and backgrounds simply use the day as an excuse to get snookered. No it's because they're being Irish for a day, and that means they need to be inebriated, JUST LIKE THE IRISH ARE EVERYDAY!
Just stop and think about this for a minute, because maybe you don't quite understand why this is so very upsetting. After all, the Irish DO like the drink; they self depricate all the time about it, and it's all in good fun, right? Yeah, remember where I mentioned above about a little research going a long way, providing some historic context and explaining the significance of certain outward expressions of ones identity? I do wish more people actually took the time to do so, because then you'd be aware of just how old this "Irish= Drunk" stereotype is, and how it has been used throughout history to legitimize any number of agressive domestic and foerign policies. The most famous of these cartoon images could be found in Victorian publications like Punch and Puck, with their ape like Irishman doing something loud, violent and inebriated, you know like asking for fair wages, or to not get the shit kicked out of them for the crime of being Irish. Honestly, the audacity some ethnicities had. 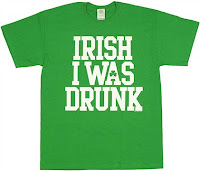 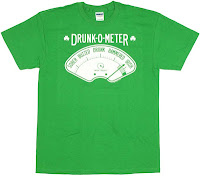 But that's all in the past now, right? It isn't as if the Irish, or the Diaspora are still portrayed as loud, violent drunks, right? Of course not.
Now, I think I should also make a couple of things perfectly clear so as to not detract from the actual source of my ire. I do not think that these idiotic shirts, hats, beads, and other leprechaun vomit products are proof of this nonsensical notion that "the only acceptable racism is that directed towards white Christians". I've come across this opinion in message boards, blog posts and commentary in response to these products, and the stereotypes they propogate. The Irish-Americans, Irish-Canadians, and other members of the Diaspora are not some persecuted minority, forced to endure systematic racism, resulting in a decreased quality of life. This may have been the case several centuries ago, but it isn't anymore. It certainly is not the same thing as groups which are actually systematically stigmatized and repressed, who are deneied the same oportunities as others because of their genetic or ethnic background. So the "it's okay to be racists to white people" meme ammounts to little more than the mewling of people who want to be unabashadely racist, but want to try and play the "...but I'm 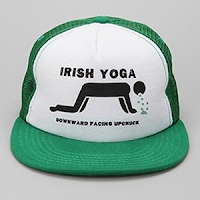 persecuted too card". It is the same sort of hollow sympathy seeking from those Evangelical Christians who believe they are also a persecuted minority. So yeah, this isn't about trying to drum up this idea of the poor persecuted Irish.
Yes, these products and the sentiments they espouse are stupid, and do propogate the worst of stereotypes. It is precisely this, that irritates me so. Understanding the history of the Diaspora and how important St. Patrick's Day (and the parade associated with it) was as an outlet to express and celebrate ones culture (which did include their religion), in the face of oppression and that systematic stigma I mentioned eariler, is an important aspect of how the Diaspora did (and did not) hold onto their culture. That it was a day for celebrating Irishness, for keeping those connections to the "old country" alive while asserting their own right to exist in their new country. This is still, for the most part, the main purpose of the numerous Parades which do occur across North America. Almost all of them are organized by local Irish groups, who still maintain that they do so in celebration of their cultural identity.
So when a day is supposed to be about celebrating a culture, about celebrating an identity, and that identity is then popularly portrayed as being the worst stereotype of that culture, the meaning and significance is completely lost in a sea of four leaved shamrocks, leprechauns and an alcoholic haze. It isn't an appropriation of Irish culture, because you would need some actual Irish culture to be appropriting. No, its bizzarely just a sophmoric misrepresentation, which is then celebrated as being authentically Irish; cultural misappropriation, perhaps?
I know, already some of the other responses to such lamentations: "...but come on pal, the Irish have a sense of humour about these sorts of things", or (and my personal favourite) "I'm Irish (by which they mean of Irish descent), and I think its funny, what's the harm?" The harm, of course, is completely lost on such folks because their closest contact with actual Irish culture or tradition is the bowl of Lucky Charms they had for breakfast. It is an argument from ignorance because they do not understand the significance, and so are indifferent to the point of arguing that people who do get upset or irritated by such portryals, "just need to lighten up." So when taverns across the land offer "black and tans", to the point where Nike actually developed a shoe which is also named, as a way of "celebrating Irish culture" for St. Patrick's day; isn't a case of stupidity and lack of research, the fault lies with the PC police who can't take a joke.
Okay, here is a compromise then: I'll stop "getting my panties into a bunch" when they stop wearing this crap, treating the day like its some sort of bachanal, and actually crack open a book and learn something about Irish history or culture.
P.S.
Things to do, to actually learn about or experience some actual elements of Irish culture, if but a few suggestions:
An addendum, for those who haven't already figured the little joke out yet. Have a gander here.
Posted by Sionnach Gorm at 2:57 PM

You've stumbled upon three shouts on a hilltop, where you will find the opinions of a Gaelic polytheist on religion, politics and anything else I feel compelled to discuss.